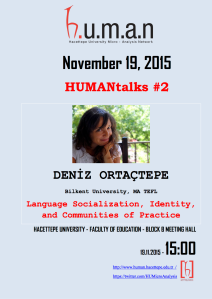 HUMAN Research Centre organises the second seminar of HUMANtalks series. Deniz Ortaçtepe will give a talk on Language Socialization, Identity, and Communities of Practice. Dr. Ortaçtepe completed her BA (in ELT) and MA degrees (in Educational Sciences) at Bogazici University, Turkey. After working in Turkey for several years both as a research assistant and as an English teacher, in 2007 she moved to the United States to pursue her doctoral degree. In May 2011, she received her doctorate degree in Curriculum and Instruction at the State University of New York-Albany, where she was also teaching academic writing to graduate students. She is currently teaching in the MA TEFL program at Bilkent University. Her research interests are second language socialization, teacher development, intercultural pragmatics, and sociolinguistics.

The talk will be delivered at 15:00, on the 19th of November in the Faculty of Education Block-B Meeting Hall. We would like to invite researchers in and beyond Ankara to Dr. Ortaçtepe’s HUMANtalks seminar.

One response to “HUMANtalks #2 – Deniz Ortaçtepe – Language Socialization, Identity, and Communities of Practice”